To begin let’s hear from some leading happiness experts who’ll help us more precisely clarify what happiness is. We all have our personal notions of what it means to be and feel happy but as this program is about the science of happiness, it’s important we all have a commonly agreed upon definition as well as one that the field of science agrees with. To do so we’ll defer to a few of those scientists as well as hear some other pertinent views.

Firstly, let’s turn to Professor of Psychology at the University of California Riverside, Sonja Lyubomirsky. Professor Lyubomirsky is one of the world’s leading researchers into the science of happiness and the effects of happiness interventions, has published numerous professional papers and articles on the topic and is the author of the best-selling books: The How of Happiness and The Myths of Happiness.

Next we have a highly entertaining presentation from the Dalai Llama on his view of happiness and also a few practical tips towards cultivating it.

And now here’s a few more salient thoughts on the topic courtesy of The Atlantic.

Now we’re going to turn back to Prof. Lyubomirsky to help us uncover some of the key factors that determine happiness. Here Sonja unpacks her ‘set point’ theory, meaning we have a genetically set predispositions that account for our levels of happiness. To her roughly 50% of our happiness is largely factory loaded, encoded in our DNA or by other early life circumstance and conditioning. Another 10% is accounted for by life circumstance: so the pay rise, the new house, the marriage and even the sunny day.

As you’ve heard what we’re left with left with is a slice which indicates that 40% of our levels of happiness is accounted for by what we do, how we think and our personal choices.  Now this theory has had something of a roasting by some researchers as not sound however when I interviewed Sonja in 2016 she clarified by saying, 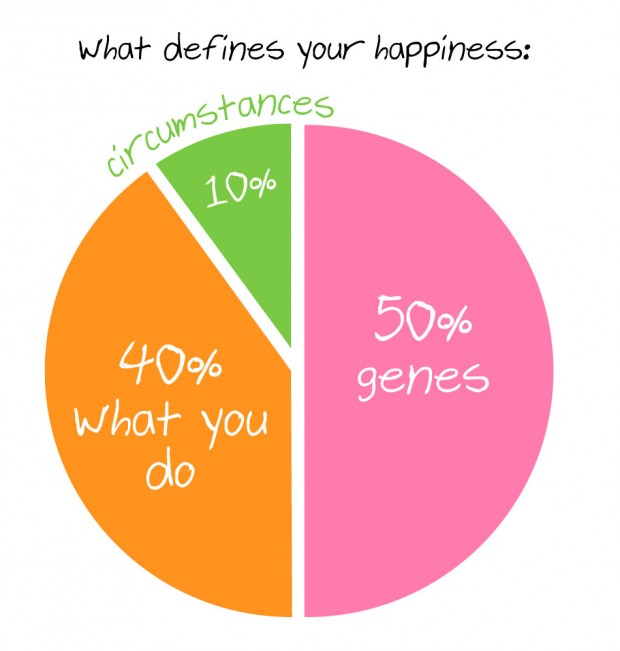 ‘I think that that is really taken often misinterpreted and it’s often taken more seriously that it was meant to be. I meant it to be a really rough guideline. These numbers are not set in stone. Also of course the numbers don’t refer to particular individuals. It’s not 50% of John’s happiness is genetics, they look for a population. I do have a little section in The How of Happiness that explains what I mean by that. I guess I want to always stress those numbers are really not meant to be taken very seriously. My point was that it is a part of happiness. Some of the individual differences in happiness that we see around us is clearly explained by genetics. There’s all these studies with identical and fraternal twins that show that identical twins are much more similar in their happiness levels than our fraternal twins, ad this suggests that there’s a genetic component to happiness. I think no one would argue with that.

We certainly know that part of happiness in influenced by our life circumstances. How much money we make, and whether we’re married, and where we live, and all of that. Not a lot, but some. We would also agree that part of happiness is determines by us. How we behave in our daily lives. I think that by giving those numbers, the 50/40/10, people took that as too strictly or too seriously. I just really meant that as a guideline to show that there really are these three sets of factors that impact our happiness levels.’

And now let’s have a look at the outcomes … meaning the many benefits of happiness, once again with Professor Lyubomirsky.

If there’s any one intervention the Prof Lyubomirsky believes pushes the needle in our experience of happiness it’s that of gratitude. Practicing gratitude seems to act as a powerful hedge against the enemy of sustained happiness which is an effect known as hedonic adaptation. Simply put this means that over time that thing or experience that once brought such joy just don’t seem to work anymore. Sound familiar? It should because it affects everyone of us.

‘When you truly appreciate and you’re truly grateful for what you have, it’s a way to counteract hedonic adaptation, because when you’re really grateful for something it’s kind of like the opposite of taking it for granted. After awhile we take almost everything for granted, so we need to kind of pause and think about what we really have been taking for granted for a number of years and like, “Wow. They really are wonderful and we’re so happy that we have them”. Or for our health, or for our family, or et cetera.’

And here is the solution …